We’ve heard it all before: Faster is better, and greater download and streaming speeds mean better internet service. That’s why many cable companies and broadband providers charge high monthly rates to consumers for bandwidth and speeds of 250, 500, or more megabits per second. They claim that people streaming video or playing online games need these high rates.

But do they, really? Or are these internet service providers just selling snake oil?

According to testing by the Wall Street Journal and a report by NPR’s Marketplace, if you’re paying for higher internet bandwidth, you’re probably buying snake oil.

A team of 53 WSJ Journalists working with researchers at Princeton University and the University of Chicago studied internet use over a period of months, and they uncovered the cold hard truth that the majority of consumers are grossly overpaying for internet speeds that they don’t even need. Test subjects experienced little improvement in streaming resolution or general operating speed with increased service speeds. The results were the same even when using multiple devices simultaneously and running up to seven streams at the same time.

In fact, the median speed used by individuals accessing the internet on multiple devices in these tests was a measly 7.1 megabits per second, less than 10% of the bandwidth available to them. Shalini Ramachandran of the WSJ put it best when she said, “We’re basically paying for a bunch of fallow pipe.” 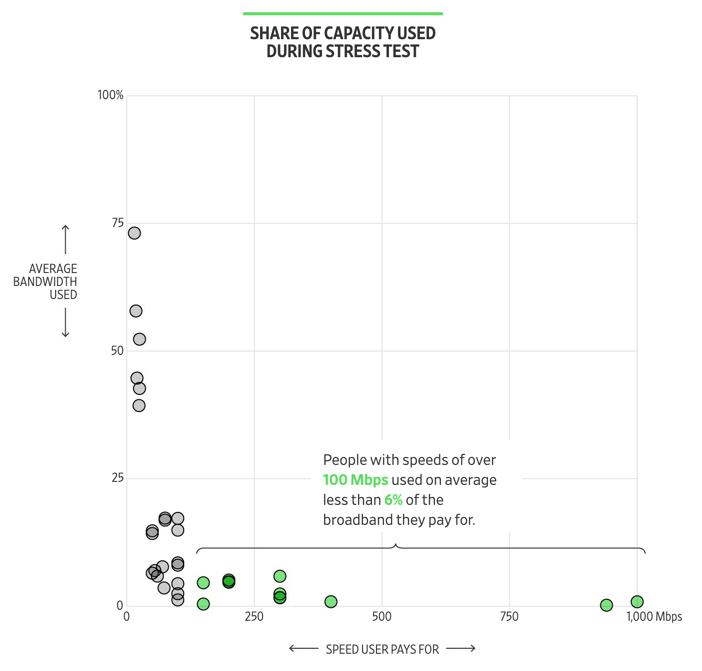 Listen to a summary of the research on NPR’s Marketplace (“For faster internet… do you really get what you pay for?”), and read the full report with helpful graphics, “The Truth About Faster Internet: It’s Not Worth It,” on the Wall Street Journal (paywall).

At Green Light Wireless, we have long advocated against marketing astronomic bandwidth and speed to consumers. We don’t pressure anyone to pay for service levels they don’t need. We keep our prices affordable, while at the same time providing reliable, high quality broadband that you can use to surf, stream, download, and share on all your devices.

Find out more about our broadband services in Pittsburgh, or contact us to schedule an internet installation or get more information.